Aldermen Look at Capital Projects for 2017-18

The Amsterdam Common Council continues to narrow down what capital projects to pursue during the 2017-18 fiscal year while trying to figure out if some purchases can be made by the end of this year.

Projects expenses in each fiscal year were approximately $5.70 million, $2.27 million and $1.06 million respectively before aldermen began tweaking the list. 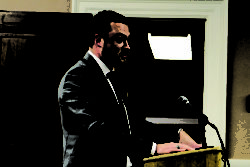